Deny
More information
Home Are your enclosure features suitable for a F&B environment? 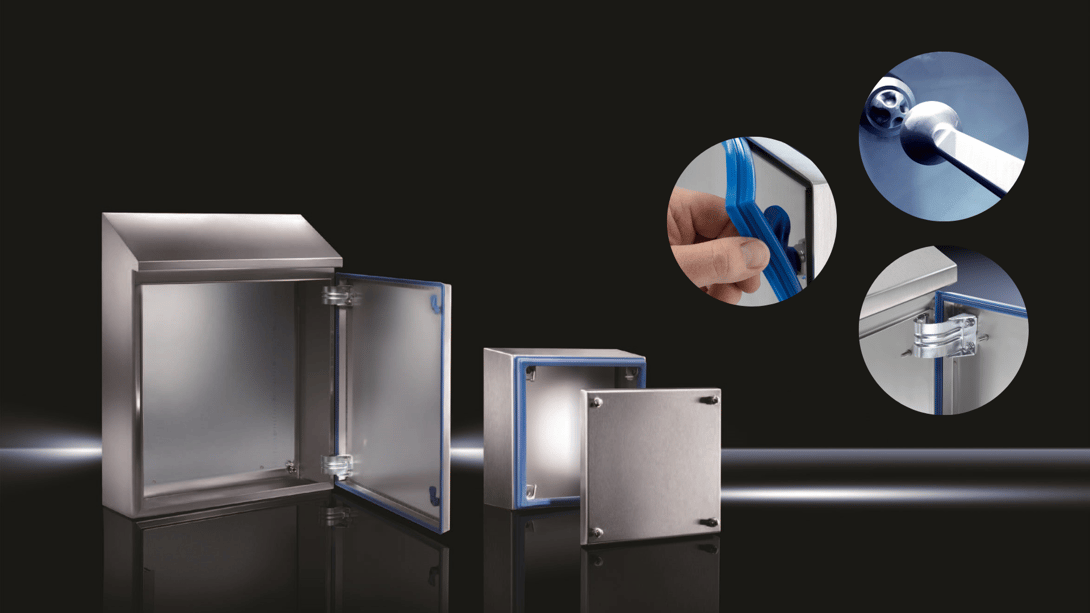 Are your enclosure features suitable for a F&B environment?

After 12 years of visiting end user sites to assist with specification of enclosures and the relevant cooling and power distribution products, it became all to apparent that most enclosures (despite the application) are selected mainly based on an IP rating. But should this be the only factor when selecting enclosures for Food and Beverage production?

It’s a general misconception that an IP rating is fundamentally the most important design point of an enclosure. Whilst it is a very important feature the overall design of the enclosure must be considered. When working in an environment such as Food and Beverage, an IP rating that matches the harsh washdown procedures is a must but, there are other considerations just as important.

Over the years I have seen enclosures filled with water and foodstuff (despite the IP rating), enclosures with metal lock parts missing, enclosures specified by material only (Stainless) and worst of all enclosures selected on a cost factor only.

Whilst one of the greatest fears in the Food and Beverage sector is the potential for bacteria and cross contamination, it amazes me that in this day and age more end users don’t address these issues and continue to use products that don’t meet hygiene standards and are sub-standard for the application. However, whose responsibility is it to select the right products initially? The Electrical Engineer, the Production Manager, the Hygiene Officer, the Maintenance engineer? As a supplier we also have a responsibility to inform and educate people to ensure that when they select a product they do so having made an informed decision.

A standard enclosure is typically built to prevent dust and ingress entering into it and to protect the installed equipment, and this is still the case with the Hygienic Design enclosure except it needs to consider much more than just those few factors. This when the Design of the enclosure means everything.

The design of the enclosure is everything

In a Food Manufacturing environment specific Zones such as Zone 1 are where Hygiene means the most. These are areas where open process of the food manufacture takes place, because of this these areas are cleaned in the harshest of ways. High power hot jets of water typically cover the production lines and any equipment in or around it. Chemicals can also be used to ensure the elimination of bacteria however, if the equipment in that area isn’t designed for those sorts of conditions then the resulting factor is, degradation of equipment, down time and worst case foodstuff and bacteria still being present. 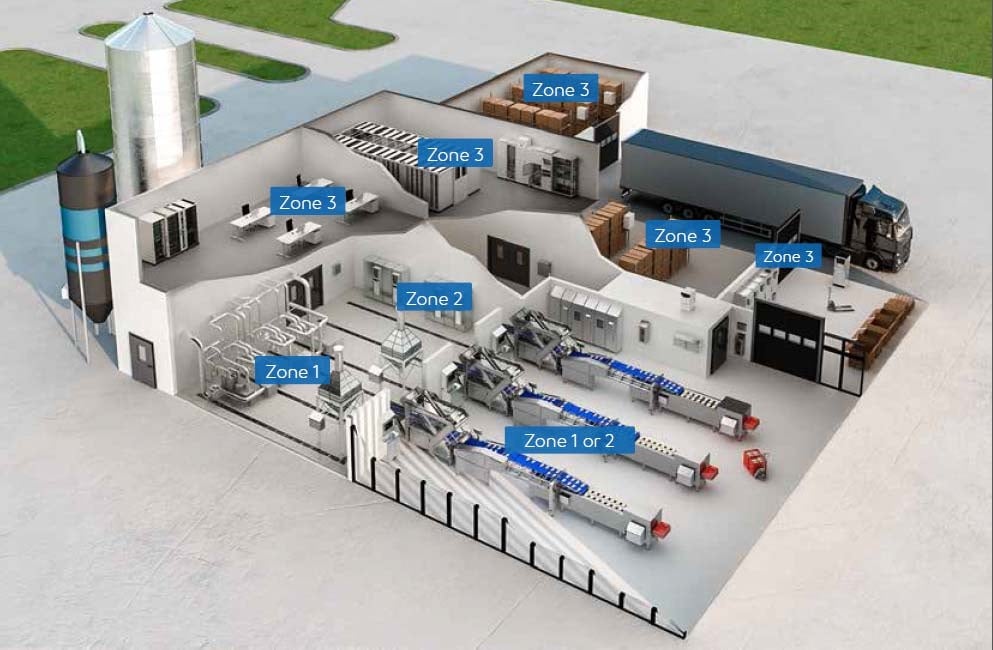 The 3 zones with a Food and Beverage factory.

The seals on standard enclosures are design to keep out wind driven rain not high-pressure hot water. Standard seals in this type of environment will only withstand so much before they breakdown and start to allow water into the enclosure. This then jeopardises the components within it and the risk of stopping production increases. I’ve seen many enclosures where the seals have broken down over time and due to cleaning, foodstuff is then forced within them during the washdown process. This then becomes a breeding ground for bacteria. Because standard enclosures are usually design to sit within a factory without the presence of water then the design of the door and housing also isn’t suitable. It makes the cleaning of it near impossible. It may look clean in some instances but because of the design constraints product will be in the areas you cannot see, not to mention bacteria which isn’t visable to the naked eye.

Enclosures for such complex applications need to be well thought out and consider all of the manufacturer’s risks. Creating an enclosure which does not have the usual crevices, where food stuff can sit means less risk to the consumers of products they purchase. Typically hinges, door locks, cable glands and plinths on an enclosure aren’t design for the application so they have areas where foodstuff can congregate, a specifically designed enclosure for this application addresses these issues.

Features on an enclosure such as wall brackets that are round and smooth, a door designed to prevent water sitting on it allowing it to erode the seal, cable glands with interior threads so the outer surface is smooth. These are features that have been design with the end user in mind.

Important features of a Rittal HD Enclosure for maximum hygiene.

Enclosures are more than just a 'metal box'

Electrical enclosures are a fundamental part of the production line but are usually overlooked as just a ‘metal box’. This ’metal box’ houses the heart of the production line, its what keeps thousands of pounds worthof equipment protected and ensures production keeps running preventing downtime, it keeps the users around this equipment safe, and in specific applications it should by sympathetic to its environment. One size doesn’t fit all as they say, the wrong enclosure could do more harm than good and ultimately create more problems.

Selecting the right product for the right application means time and attention can be focused elsewhere, giving the manufacturer greater peace of mind.

To show the true effect of the features of a Rittal HD enclosure, Rittal put a HD enclosure to the test against the best selling Rittal AE enclosure. The results of the experiment may just shock you, and even be happening in your factory right now! Download the free infographic for more info.

Emma Ryde Emma has a wealth of experience gained over 20 years, developing technical sales in a range of industries including food and beverage, automotive and transport. Her sales and engineering experience as a key member of the Rittal team resulted in her being appointed as Product Manager for Industrial and IT Enclosures. Her remit extends across support for Rittal’s customers in existing markets, as well as developing new opportunities as they arise. She has an HNC in Mechanical Engineering. eryde@rittal.co.uk Emma Ryde auf LinkedIn 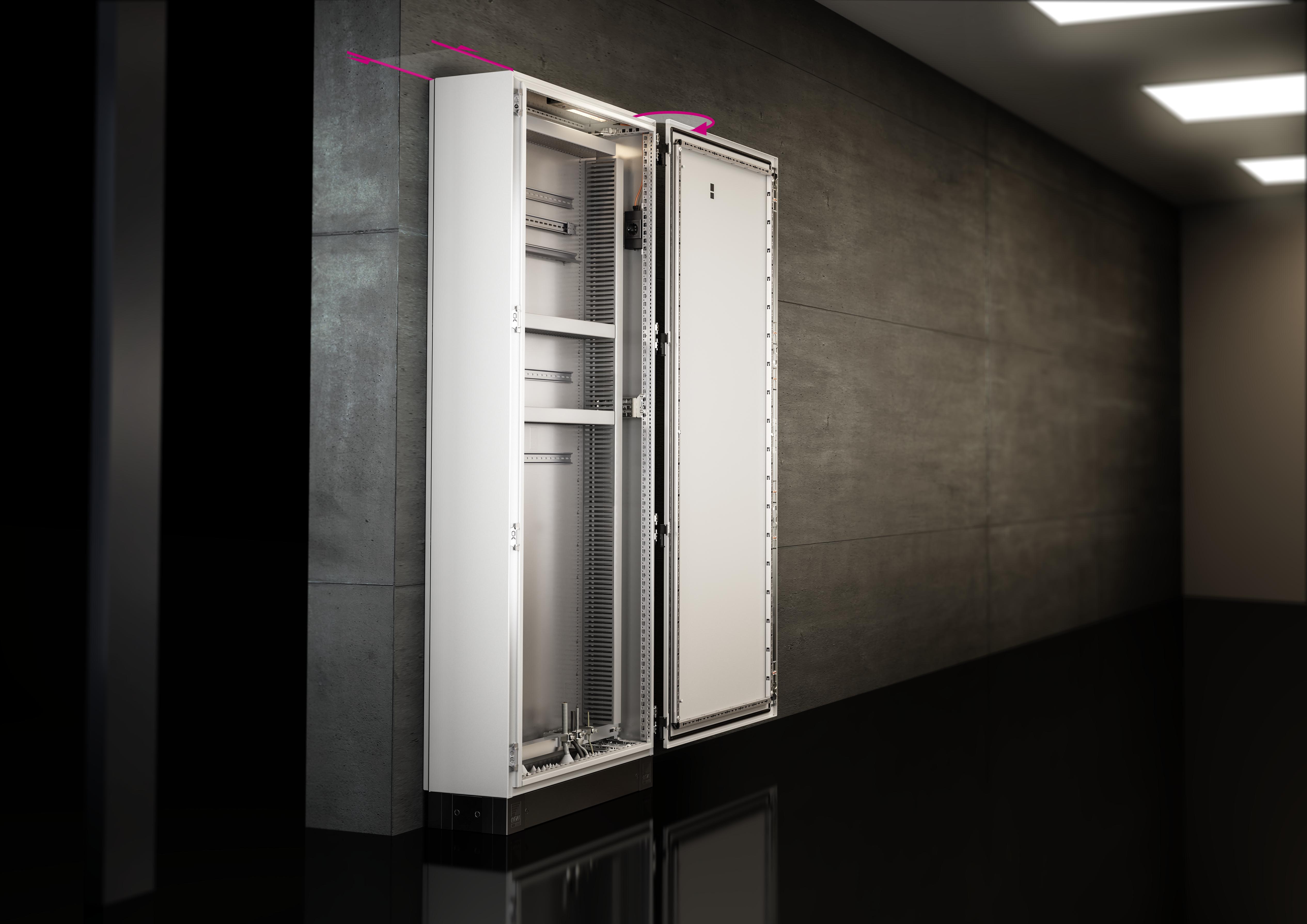 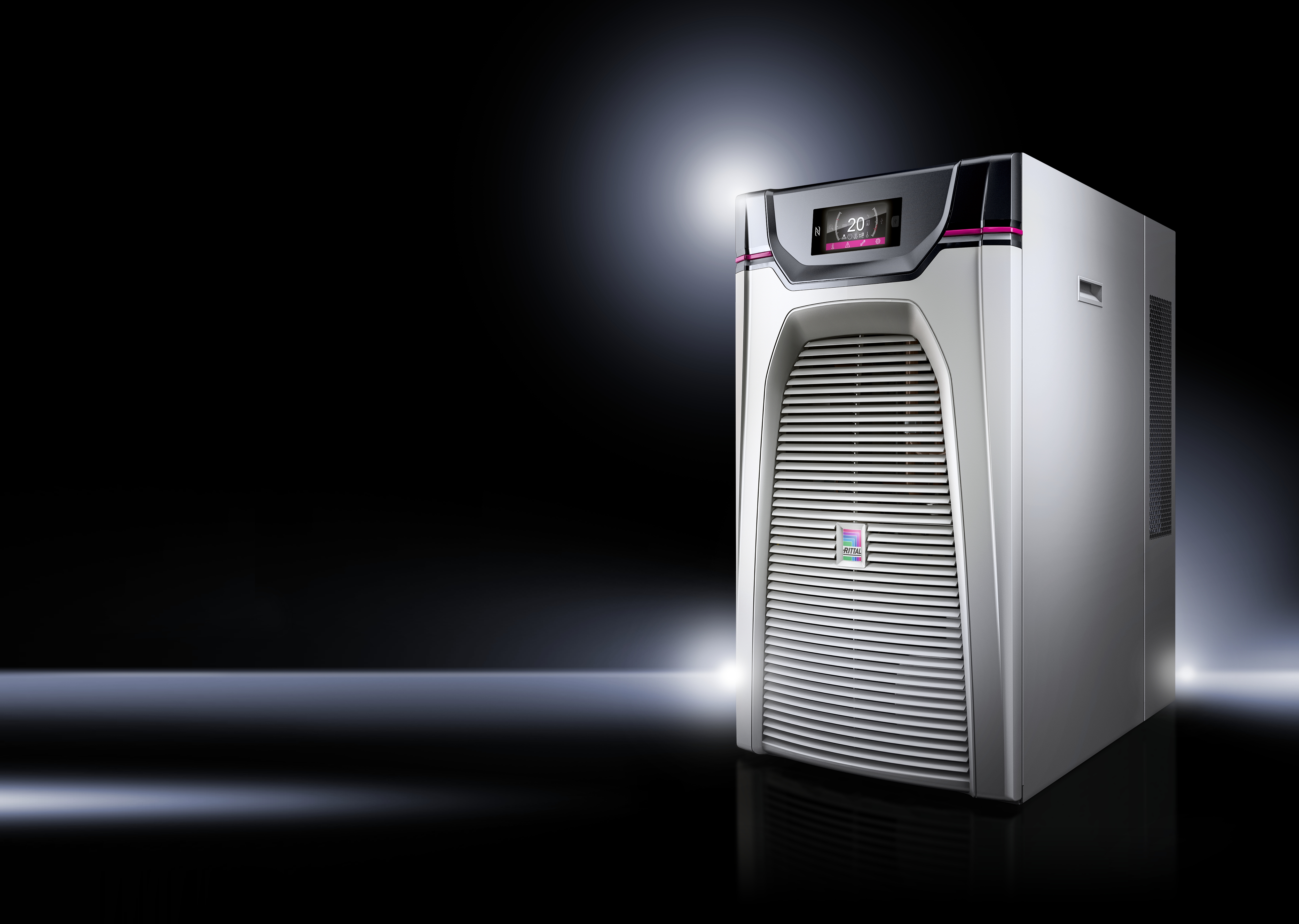 Liquid Cooling – A powerful companion for your equipment 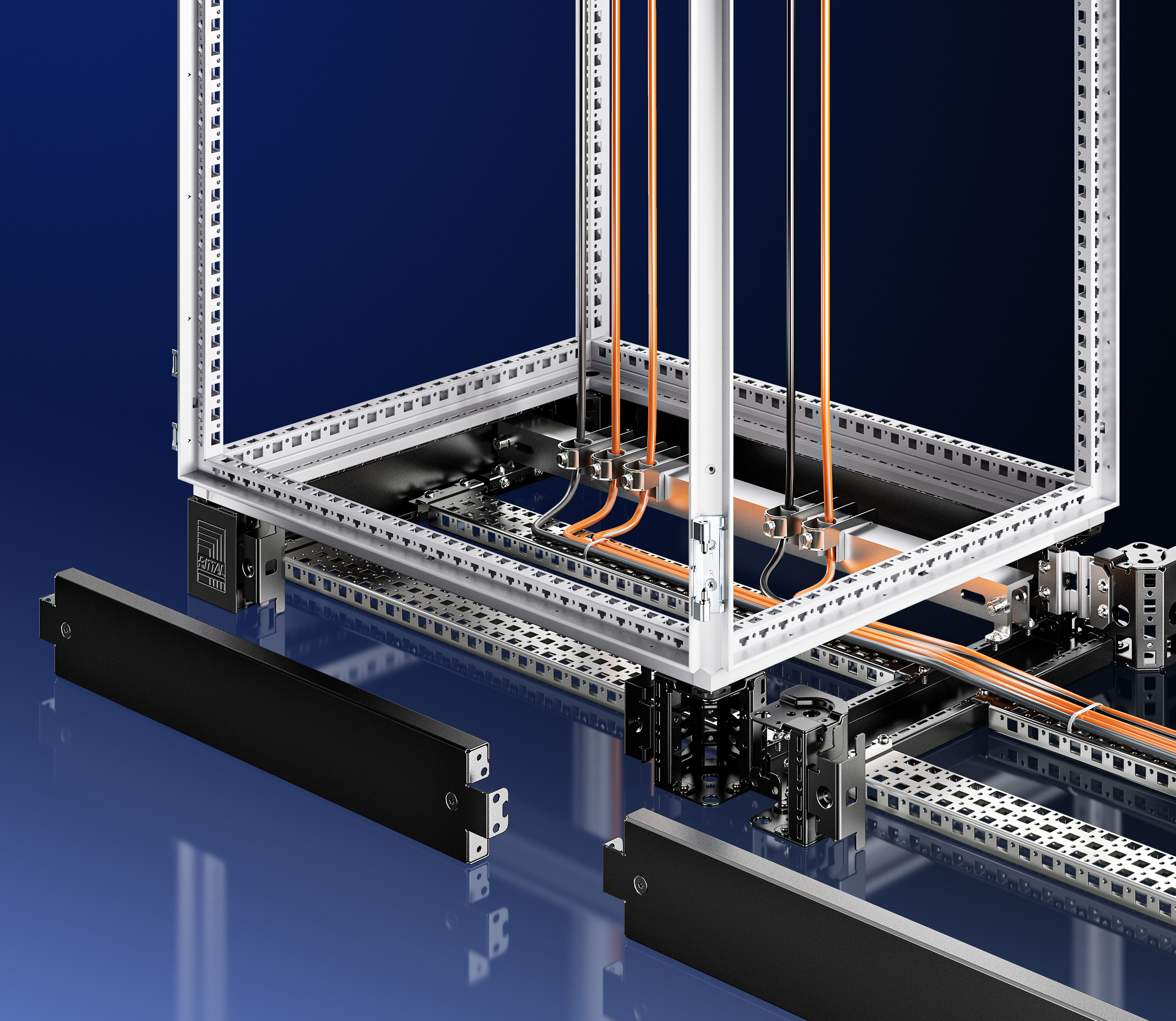 Why Systems Accessories for Cabling are Indispensable 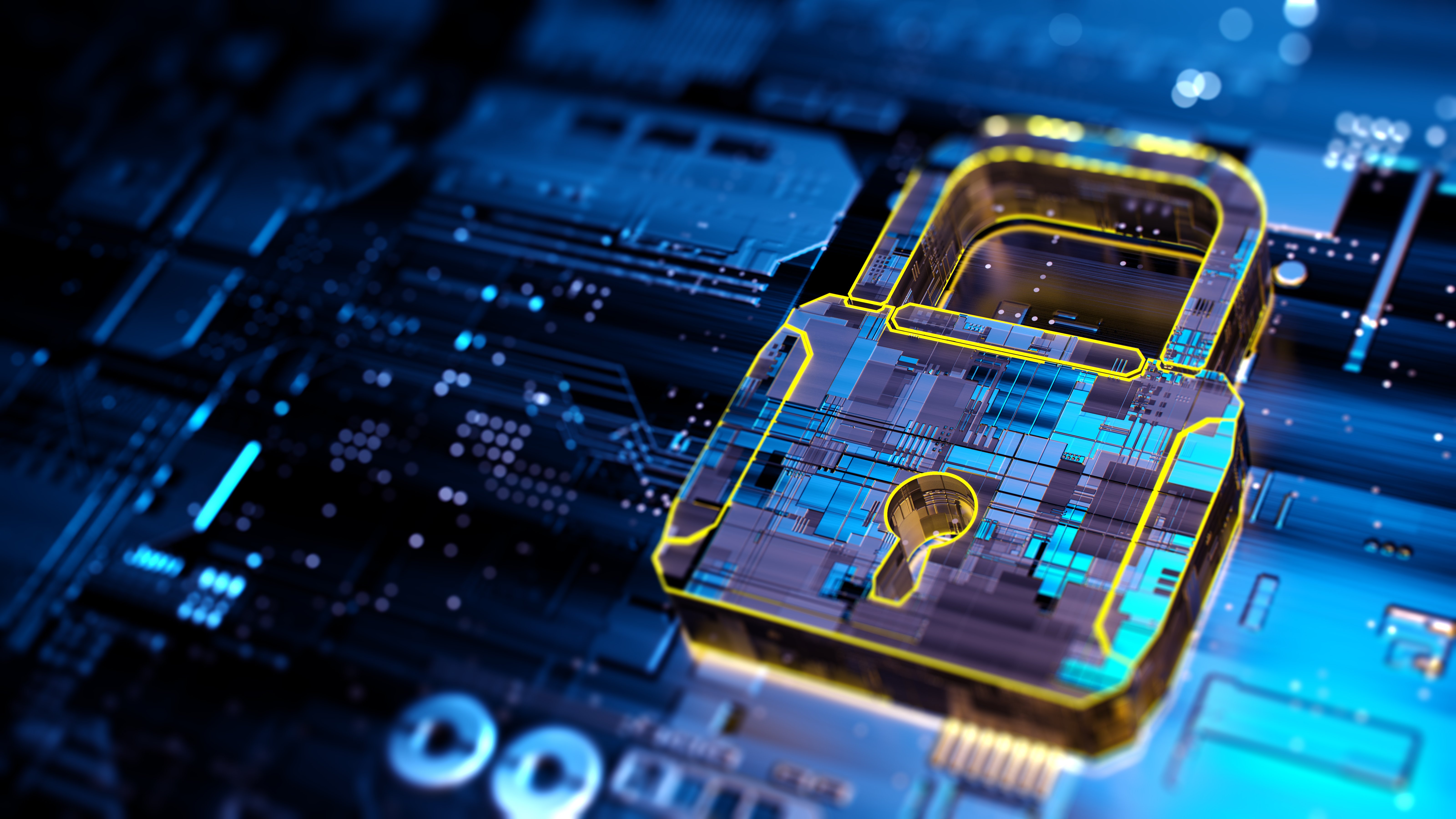 Don’t risk the protection and security of your IT equipment! 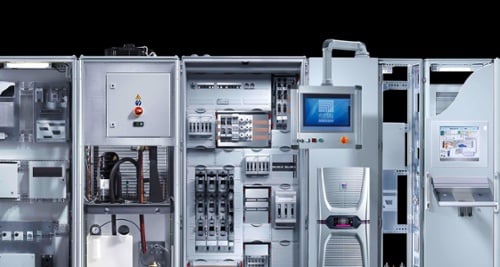